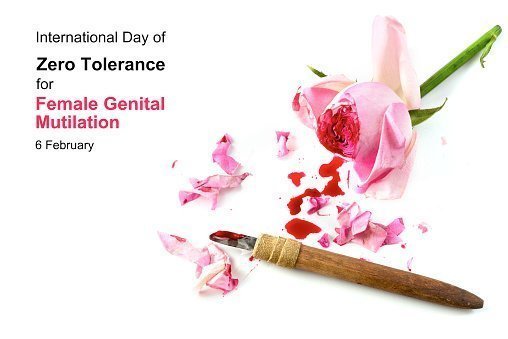 Female genital mutilations (FGM) are a popular cultural practice in Africa. It is a practice that has been going on for ages. It was quite prevalent in Nigeria in those days and still is.

Female genital mutilations are procedures that intentionally alter or cause injury to the female genital organs for non-medical reasons.

FGMs are usually barbaric in nature because they are performed by people who are not medical professionals but are usually old women who have been taught the procedure. Thus, it has perfected the “art and act” over time.

There are also instances where medical health care providers perform FGM due to erroneous beliefs that the procedure is safer when medicalized.

This is one of the predicaments faced by the African child. The African female child is subjected to a lot of human rights violations.  It is a wonder that a good number of African women are succeeding in their lives.

The African female child is deprived of education in Africa countries by virtue of the fact that they are considered “inferior” to the African male child.

They are generally regarded as home keepers who do not need any form of formal education.

Statistics abound out there on the African female child and education and I dedicated a whole blog post on The Female Child, African Culture and the Society.

These female genital mutilations are usually done with razor blades and other objects that are in huge cases unsterilized.

Female genital mutilations have been ongoing for decades if not centuries.

The fact that knowledge about hygiene and lots of diseases was not readily available to a good number of countries in Africa, gives me the chills!

How many African females contracted deadly diseases and infections from this barbaric act?

How many morbidities are being recorded from FGM that is essentially a violation of the female human right?

Memories of FGM “Circumcision Rites” As A Young Girl

This blog post was initiated and inspired by a request from a follower on my blog after he read about The Female Child, African Culture and the Society.

He requested that I do a blog post on female genital mutilations as well. I promised and here I am delivering on my promise.

Coincidentally, today, 6th February is set aside by the World Health Organisation as an international day of zero tolerance to female genital mutilations.

A fact I stumbled upon while editing this blog post.

This goes to show that this blog post and the whole idea behind it is destined to be and I hope it will serve the purpose for which it is intended. Ending female genital mutilations all over the world.

I remember quite vividly the funfair and fanfare that usually accompanies the female circumcision rites where female genital mutilations “happens”.

The circumcision rites are characterized by young girls tying white wrappers over their chest and rubbing red ink known as “isele” in my Nigerian local dialect on their legs.

It is like a ‘coming of age” rite heralding the female as an adult and a woman.

The circumcision rites take place for  7 days and a “party” is usually thrown by the young girl’s family to celebrate. Female genital mutilations during circumcision rite are mostly carried out on young girls from infancy and age 15.

I may have witnessed the whole gig when the rites were performed on a female family member but the memories are hazy.

What I do remember are the white wrappers, “isele” and the gaiety associated with female circumcision rites where female genital mutilations are carried out.

The Panic About Female Genital Mutilations 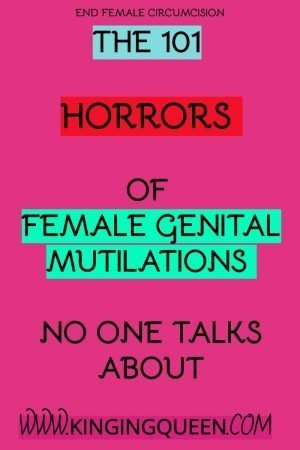 I believe I may have seen this as one big party if my earliest memories of it were funfair and fanfare! How sad! A sneaky thought did occur to me while I was developing this! I was worried if I was circumcised!

Yes, I was worried! I didn’t know and I was perturbed that my memories about the rites were those of my own circumcision rites! I had to call my mom. Right away!

You can imagine my frustration when I was unable to reach her for several hours on that day! I was moody at work. I got through eventually and asked her without any preambles if I was circumcised.

In Africa, that would be considered as being disrespectful!

Well, I was on an important seeking mission so my manners can be forgiven for that day!

I think she was taken aback by my question but she did say “hell no!”. The kind of relief I felt that instant, took me through all that day even till this moment! So none of my female siblings were “mutilated”.

Thank God! The relief I felt also spurred me to research female genital mutilations so as to create awareness and form a forum to end FGM even if it is in my own locality!

The statistics speak for themselves. Female genital mutilations are a global concern!

Female Genital Mutilations: What It Does To A Woman

FGMs are an inhuman act that needs to be ended and to prevent/stop the one million issues related to female circumcision.

Apart from female genital mutilations being a gross human right violation, not having no benefits whatsoever for girls and women, there are health and sexual related as well as psychological problems associated with FGM.

Perhaps the most haunting effect of FGM on a woman would be its effect on sexual satisfaction. Indeed as mentioned earlier in the blog post as reasons for carrying out female genital mutilations is preventing promiscuity.

Sexual satisfaction for the woman who has been circumcised would be drastically reduced if not nonexistent (this is dependent on the type of FGM procedure carried out.

Of course you all know that will profoundly affect the quality of life of the circumcised woman and lead to marital issues.

The World Health Organisation WHO is trying all it can to ensure that this barbaric inhuman violation of the female child is ended all over the world.

Beginning from 1997, great efforts have been made the counteract FGM through research. Work within communities, including changes in public policies.

Through the years, programmes and statements have been issued jointly and solely by WHO, UNICEF, UNFPA. Most recently, in May 2016,

WHO in collaboration with the UNFPA-UNICEF joint programme on FGM launched the first evidence-based guidelines on the management of health complications from FGM.

According to WHO, to ensure the effective implementation of the guidelines, it is developing tools for front line health care workers.

This is to improve the knowledge, attitudes, and skills of health providers in preventing and managing the complications from FGM.

Despite these international endeavours at ending female genital mutilations, African countries where FGM is being practiced, do not have any federal laws prohibiting FGMs.

In Nigeria for instance, there is no federal law prohibiting FGM.

This has led to slow progress on declining the prevalence of FGM in Nigeria even though there are international “presence” and women organisations advocating the end to female genital mutilations.

I believe a plausible way will be to tackle the issue from the very “grassroots”. Educating those in the villages in all nooks and crannies of the world.

Take the message to areas where female genital mutilations are prevalent in society.

Education should include all aforementioned associated risks, both short term, and long terms.

We all can contribute to ending this social ill by educating our parents, family members, neighbors and friends. That way, every day, we make efforts to end this inhuman act.

Say No to female circumcision!

Say No to female genital mutilations!

Building A Better You: …