Procrastination. What is it? Wikipedia has this to say about it.

''Procrastination is the avoidance of doing a task that needs to be accomplished by a certain deadline. It could be further stated as a habitual or intentional delay of starting or finishing a task despite knowing it might have negative consequences''

Often times we always want to put doing certain things away for some time, when it is time (the time we have set, ourselves), we put away the activity again until procrastination becomes a pain!

I tell my personal stories on  The Chronicles Of Jennifer

This reminds me of a time I procrastinated so much that I ended up breaking up an otherwise beautiful friendship. I used to have this close friend while I was in high school.

You know that period you are home, writing Jamb (university entrance exams), awaiting results from NECO and WAEC and GCE and all the naughty things you get up to (i was a good girl though I promise!)?

Well, my friend and I were in that state of "limbo" when her elder sister got married. We were chosen as bridesmaids (yeah! I still can feel my excitement even now!). You see, it was the first time I ever had the honor of being someone's bridesmaid! It was so awesome, I started planning. Now, there was a downside though.

In retrospect (hindsight is a bi***), I should probably have opted out knowing full well that I would not be able to pay! But no one and nothing was going to deter me from being a princess in a bridesmaid's dress!

The day of the wedding came, we dressed up, danced, had fun and went home. The dress was taken off and ironically, never to be worn again.

Oh well, it did serve a purpose, right? The payment became an issue. Things got worse at the home front, I wasn't working and of course, there was no way I could pay.

As a matter of fact, this lingered on for years until it became this huge gaping hole between me and my friend and spoilt a childhood friendship that should have blossomed into adulthood. Things became deteriorated between our families to the extent we stopped talking to each other.

A few years down the line, my friend lost one of the only two brothers she has. Out of shame, I never went to say sorry (even though deep inside me, I was mourning her loss). I would tell mutual friends to go visit and console her but I never went. Procrastination is a pain! I tell you.

The result? I lost my friend! I lost a childhood friend to procrastination.

Moral of the story? Stop procrastinating.

It is a pain that will inflict much more pain! Just imagine procrastinating on a job assignment only to do it at the last moment with errors that could have been detected if you had done it earlier. Instead, you got humiliated at the annual general meeting at your workplace for "your not too stellar performance".

When it is time to do something, do it. Apologize (in my own case) if you need to apologize for your mistakes (even when you don't need to). That "to do" list on the sticky notes on your laptop at the office, start crossing them off.

The business you have been planning to start for the past few years or so, get to it. Start now. Start today. Not tomorrow. This POST will show you 5 ways to set goals and achieve them

Imagine, a festering wound getting bigger and bigger, every day because you refused to take care of it.

Then it gets so big that even when it heals, it leaves this huge scar behind which should, in essence, shouldn't have left any scar at all if you had done all you were supposed to have done when the wound was this tiny.

A few years ago, I and Mary have connected again (we lost contact for several years) through one of her sisters. We talked on the phone a couple of times but have never seen face to face since the incident from our high school days.

At times I wonder what would have happened if our friendship would have blossomed through the years?

There are several reasons we have procrastinated in the past. Take for instance my story. The biggest reason I let the wound fester so to say was fear and then shame.

I recently discovered Motivation Grid and these are the four causes of procrastination up on their website and I do agree with them!

If you are the type that fears failure, you will tend to procrastinate a lot. This would mean holding off on initiating or starting something. You, however, need to recognize and accept that failure is a part of life.

A lot of us pride ourselves on being a perfectionist. I used to feel I am one but had to change my mentality.

Perfectionism is the grandfather of procrastination!

You know why? It is because you want everything to be perfect.

When you want to do something that is outside your comfort zone or very different from what you are used to doing because you won't want to start until you are sure the end result would be perfect.

Then procrastination sets in. Just start already! You can fix ''loose ends'' as you go.

Low energy levels would mean you become lazy about carrying out a task and then you procrastinate.  This may be due to an unhealthy lifestyle.

Adopt a healthy lifestyle, exercise, eat healthier meals. Increase your energy levels and you will have the motivation to do what you need to do.

All other things being equal...

I noticed that I tend to lose focus when I don't plan my day and week well. I just jump all over the place. Start something and then not finish it.

A lack of focus will lead to procrastination.

Develop a routine that improves your focus and then commit to it.

Now onto the ultimate guide for overcoming Procrastination! 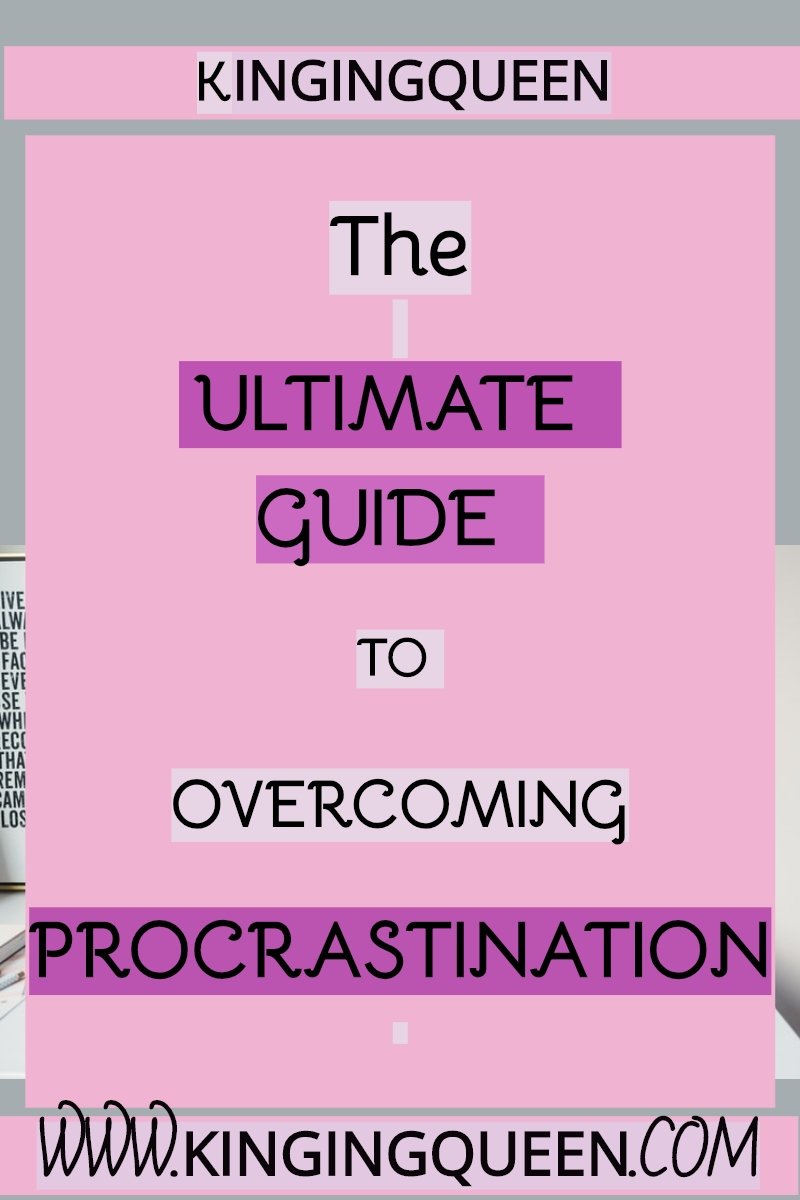 Let's all do what we have to do at every stage in our lives to save us the pain of procrastination. Here are five tips for overcoming procrastination on a daily basis.

1. Look At The Big Picture

Most times we focus on the immediate (short term) instead of looking at the long term gains of carrying out a specific task or doing something at a particular time.

For instance, we want to focus on the boring or unbearable  (short term) aspects that may be associated with completing/carrying out/doing something as opposed to the gains (long term) for example, the feeling of contentment and achievement, praise, etc from getting the "task" done.

Imagine the feeling of relief you get after making that call you have been dreading to make all week long and the feeling of achievement after completing an important assignment at the office on time and doing it perfectly and the praise you got from boss man!

If a task is daunting just because of the sheer size of it, break the task into smaller sizes and get to it. Let's see, you need to prep meals for the new diet (or a resolution to eat healthier) and it just seems so enormous.

All those meals to prepare! You could break it into preparing all the breakfasts in one day, lunch packs in another day and so on. Instead of prepping all the meals in one day. You are well on your way to a healthier you!

These Free Productivity Apps will help you carry out your task easily and effectively.

To avoid this, know and understand your limits and capabilities and work around them in getting a specific task done or doing something.

For instance, I function optimally at nights and in the early mornings so I tend to "get things" done better during those periods. For some reason, once it is 12 noon (even when I was in university), it always seems as if my whole body system is rebooting!

As soon as I discovered this, I started working around that time so it does not affect me in any way. Personally or professionally!

Whatever you do, do not Stress yourself.

The purpose of having a partner is to act as a checkmate. Someone who would hold you accountable for something you need to do. It could be a colleague at the office, friend, partner, sister, brother, etc.

Not someone that will "help" you get away with not completing a task! Someone firm enough to push you to do what you need to do.

Go ahead, darling! Reward yourself. Fleek your hair and tell yourself, "I am a badass"! Yes! After getting a task done, you could reward yourself by eating a large chunk of cake (Hahahaha. You will go do some jogging to burn off the calories!), get yourself something you have been wanting to get yourself.

The idea of "rewarding yourself" of course means that this would be in the plan right before carrying out the task, doing whatever it is you want to do so that you can get motivated to do it. So plan something nice to reward yourself.

It could be, being on social media for long periods of time (you have denied yourself while carrying out the task). So go on and reward yourself after achieving that goal and beating procrastination!

Now you know why they say, a stitch in time, saves nine!

How do you all avoid procrastination? Please share all those lovely ideas!