There is a movement going on in the Hollywood circle that i believe should be replicated and echoed everywhere else around the globe. It is called “THE TIME’S UP” and it is about ending female sexual harassment in the film industry.

The Time’s Up is being driven by a group of women and according to their site info, the Time’s up is a unified call for change from women in entertainment for women everywhere. Their solidarity letter clearly states what they are about with enough statistics to back their cause.

Hashtags like #timesup, #metoo (for those who have been harassed) #whywewearblack are trending on all social media platforms. This indicates that truly the movement is gaining voice.

Powerful Hollywood movie Directors like Steven Spielberg, JJ Abrams (Star Wars anyone?) are also lending the two Ms (muscle and money) to the cause and contributed 2 million and 1 million dollars respectively.

Time’s Up addresses the inequality and injustice in workplace that have kept underrepresented groups from reaching their full potential.

As a female working in a predominantly male environment, one of the indices on sexual harassment on the Time’s Up website had a profound effect on me and it is that “research has shown that women in male dominated occupations especially those in male dominated work context are sexually harassed more than women in balanced or in female dominated ones”.

Now isn’t that food for thought? 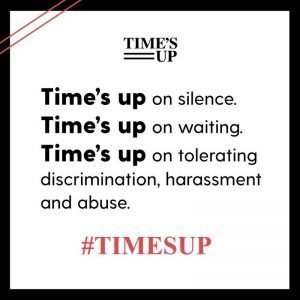 I was flipping through channels the other day when i saw a channel E program schedule for the 2018 Golden Globe live carpet with my two most favorite E channel people, Ryan Seacrest and Juliana Rancic, Yeah! I love everything red carpet. I never get tired of looking at the beauty that is Hollywood and all those beautiful gowns! Sigh*. We will get there lol.

However, today’s post is not about all that Hollywood glamour, beautiful, gorgeous and breathtaking women, beautiful ball gowns, sparkling diamonds and mile high stilettos though but it is about the theme of the awards.

Most of the actresses wore black to reflect the Time’s Up cause  and it was lovely seeing a lot of them speaking against this societal ill.

I imagine that some of them may have been subject to sexual harassment in the film industry but may still not be brave enough to speak out personally. The women all wore black to signify that they are part of the Time’s Up cause

As an offside to this, during my university days, even though cash was tight, i was able to always look good courtesy one of my big cousins (big shout out to Naomi Nilsrud!) and being someone who has a body that wears clothes really well (i am permitted to brag, thank you lol), i always come across as being flashy so virtually all the guys at school, lecturers included wanted a piece of me. 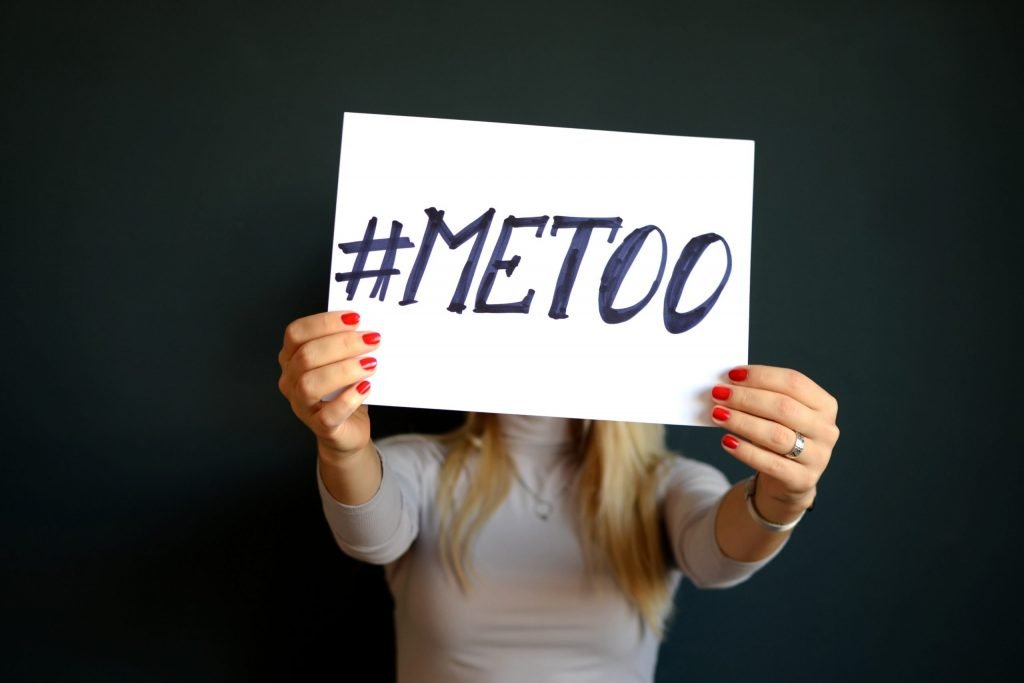 The problem about being beautiful and flashy is that people automatically “classify” you as a airhead. Thank goodness i am not one! This has been my saving grace! Till date!

Enough of the self love, Jennifer. Can we hear the story already? Yeah, you can lol. So, i became the target of my Calculus lecturer (those of you who studied Engineering should know how important Calculus is in the grand scheme of things…). He was fine, single and assumed that it is sterling ticket to lay his students. So well, this here dude started coming as a friend.

Oh you are intelligent, you are this and that. Your English is impeccable, You read a lot? I got “hooked” from being asked if i read a lot. It is the best “best place” in my life. Reading that is. He would borrow me novels (in the university premises please), i would read and return.

Now being flashy and beautiful with a great body didn’t mean i was wordly. I was quite naive in those days (still are, God help me!) I didn’t understand what he was playing at initially but when he came outright to say it, i refused and that refusal was to start a “saga” that led to me having the only carryover course at the University.

To cut an ‘interesting and intriguing” story short, when i took the first semester Calculus exams, the lecturer came to the hall, hovering all around me, trying to make me very uncomfortable (i was damn uncomfortable), for almost half the duration of the exams.

That was harassment on his part. Hindsight is a bitch.

At the end of the exams, i was leaving in the midst of some course mates, when i heard my name being called. I turned to see Mr lecturer, he beckoned, i excused myself and walked back to him and these were his exact words “i just looked at your script and you did well but you are failing my course”.

I can never forget those words! True to his words, i failed the course and it was a big surprise to everyone who took the course. I mean, they know Jennifer!

Emissaries were sent to meet him by my cousin. From the Chief Librarian, to the Library assistant who were thought to be close to him were asked to beg him. Imagine! Beg for a course that i passed!

The man refused. Flat out and failed me! Let anyone come try that with me now lol. They would be hung on a pole! Oh well, you know.

I got to “pass” after having to write the course as a carryover under very intriguing circumstances that i am afraid i will leave to tell you of in some other post. Mr Ukponwan, where ever you are, you still owe me an apology and every other female student you harassed while you were a lecturer and for failing me on a course that i passed.

I heard he is a Pastor now. Fancy that.

Now, for those of us who work in male dominated profession, we have to fight for equality on all grounds! As a female who works in the oil and gas industry (yes still on a 9 to 5 job), predominantly dominated by males, i have had more than my own share of workplace abuse.

I have had to work as twice as a male counterpart to be recognised and i have to stand up and speak up whenever i felt victimized. But it is not everyone that has the courage to speak up.

Time’s Up cause is therefore a worthy cause we women should contribute and ascribe to. You are a man. Do you believe in equality? Do you stand against harassment in all its entirety? You need to join this worthy cause

Hollywood has been fraught with a lot of sexual abuse cases (look up on google). It is not only Hollywood however. It is the world over. You might be interested in reading Amina and Deborah’s story here

NBC News ha sit on their site that an Hollywood movie mogul, Harvey Weinstein has been facing allegations of sexual harassment and assault spanning over decades. This is what sparked the ongoing Time’s Up movement in Hollywood.

A number of other actors/movie directors/journalist and others in the entertainment industry like Kevin Spacey, Steven Seagal, Dustin Hoffman, Russel Simmons have also been named in the sexual harassment and assault cases in the Hollywood square

Sexual harassment comes in a number of ways. There  are two types of sexual harassment. Quid Pro Quo which literally mean “something for something” and Hostile Work Environment.

Hostile work environment types of sexual harassment would be derogatory remarks from colleagues like, “gosh, your skirt is so tight, i can feel your arse”, “you are wearing fuck me shoes”, suggestive emails and texts etc.

I usually go for morning Operations meetings at my place of work. I am the only female in a team of managers and also the youngest. I noticed a very worrying albeit annoying suggestive ‘attitude” from one of the managers.

At first, i wanted to put it down to the guy being playful, but after a while i decided, it wasn’t “play” but harassment judging from the manner the act was being done by him.

Every time, this man in question would wink at me. At the morning meetings and everywhere else he sees me. The winking acts were derogatory and suggestive.

One day, i called his attention and told him point blank that the next time he does it again, i would report to the HR department and the Executive Management. That was how he stopped!

He knew what he was doing!!!

Time’s Up on their website listed “not being a part the problem” and i totally concur. Do not be a part of the problem! If you are in the habit of harassing people at your workplace, school or any other place, please stop!

Yes, keep records of the harassment. If emails are being used in the harassment, print them out and save them. If they are texts, you can also save and safe keep them in private folders only you can access. Document every sexual harassment on your person. They will help if and when the case takes another turn and it is just your word against the harasser.

Take for instance, my confronting the harasser in the scenario painted earlier, the next step would be to report him if he had not stopped after keeping records and/or recording conversations had with him. Report every harasser. It is not to be hidden.

If the harassment continues even after reporting to your employer and or you think the issue is not being tackled, file a lawsuit girl and sue his arse! Sexual harassment lawsuits have different laws guiding them in different countries. Find out how it is done and go beat the guy in court!

Oprah Winfrey, while receiving the Cecil B. de Mille award during the 2018 Golden Globes awards (by the way, she is the first black woman to ever win the award!), stated that “speaking your truth is the most powerful tool you have” in support of the #timeisup cause.

She said ” a new dawn is on the horizon and when it finally dawns, nobody will have to say #metoo. You can watch the full video https://youtu.be/fN5HV79_8B8 here and be empowered.

You have a voice. Don’t lose it!

What are your thoughts about the movement? Have you been sexually harassed before? What did you do and what are you doing to stop it? Let me know in the comments section.

You all have a fab week!

5 Things To Consider To …