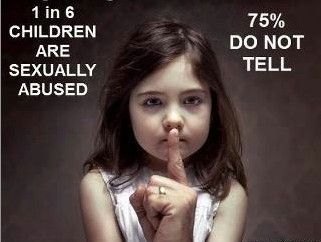 If you think leaving your kid with that person you feel you trust and can’t/won’t hurt them, then you don’t have the statistics for child molestation and the fact that those carrying out this heinous crime are usually those we trust and least expect to carry out such acts!

Bright and shining day. Shuffle in the dark. A vise like grip. A club to the head. Drugged. Grabbed from behind. Threatened. Coerced, Forced. Beaten. Unknowingly. Knowingly. Then it happens.

A stranger, a family member, a trusted friend, a random mugging. It doesn’t matter the way it happens. Molested sexually. Raped. Not just physically. Your spirit takes a whipping. A stigma that can become an undoing. In most cases, victims don’t speak out. The self blame. The “scourge” that never seems to be washed off no matter the number of baths and scrubs.

I was laying on our living room sofa. I remember seeing whitish stuff, a male cousin rubbing his dick against my bottom. There was no penetration (i really cannot tell). We were home alone. I was sleeping and woke up because i was feeling something rubbing against me. And then i opened my eyes, saw whitish stuff and him getting up. Smiling smugly. You see, i didn’t understand what happened.

I was only about 8 years old and i was sexually molested by a cousin who was perhaps 16 years older than i was at that age but i didn’t know i had been sexually molested. It was when i was about 19 years, i fully understood that act.

I was also constantly mauled by a female cousin who has passed on, one of my step sister and a friend of hers. I was helpless. There was no one to talk to. Between a mother who does business and is up at the crack of dawn and back late in the evening and a father who was a professional in a white collar job, it was hard talking, confiding in anyone. Moreso, the fact that i am a firstborn and my immediate brother was just a kid, another kid didn’t help matters.

There was no one to talk to and the shame i feel, follow’s me to this day. No one knows. It is a pain borne by me. In my heart. Deep.Inside.My.Soul. I have gone for atonement in Churches, i have prayed for forgiveness. I scrub every day trying to take the dirt away but it doesn’t seem to wash off. No matter how hard i scrub.

The said cousin ran mad years ago. While i was still a teenager. No one knows his whereabouts. Maybe he is dead. I would have asked him why he chose to do it. Questions. No answers.

I was a victim of sexual molestation. Molested by a close relation. A trusted close relation. I am 37 years now. Single. With trust issues. Cannot truly open up in a relationship.

My parents went out for their usual business. My mom to her shop at the local market and my dad to his office. He was an Accountant. I was home alone with a cousin.

Jide had started staying with us a few months back. He was 21 years and i was 12. I remember getting funny looks from him in those months but i didn’t understand the looks so i ignored him. I was a carefree and playful child. Always cheerful. Playing pranks with my playmates. Absolutely no care.

That day, it was as if the entire universe conspired to help him achieve his heinous crime. A compound that was usually boisterous with lots of noise was unusually quiet that day. I still remember the quietness just before the act. In fact, i ponder about the quietness a lot. It still wonders me. Why the quiet?

It was a cool afternoon albeit quiet and i must have dozed off. In my room. The window blinds were open to let in fresh air. With just a wrapper thrown over me because i was only in my panties. And then, someone clamped a hand on my mouth. Vise like. I couldn’t open my mouth. He was saying, “let me just rub it here. You’ll like it”. I didn’t understand but a sixth sense told me that what he wants to do is wrong. I struggled. Thrashing about. Trying to scream. He never let go of his hold on my mouth. His eyes were gleaming. Sweating. Desperately pulling down his boxers. The bastard was only in boxers.

Then i felt a piercing pain. Some seconds. Minutes later. I do not know. He shook and then took his hand from my mouth. I will kill you if you tell anyone. He says. Then he swaggers off.

I went to the bathroom to scrub off. I bathed for 3 hours. Weeping. I didn’t know where the water started and where my tears ended. When my mom came from the market, Jide hovered around. Acting busy and i couldn’t tell my mom. I was scared by his threats. I was crying inside. My mom should have known. I became a quiet child. I wouldn’t play anymore.

An only child. I am 29 years old. I never could trust any man. Didn’t let anyone in after that incidence. Got married when i was 28 to a wonderful man i dated for 5 years but could not have sexual intercourse with for 3 years. He was patient. I was afraid he would leave if i told him because i knew deep in my heart that i love him. It was not until he said he would leave that i broke down and told him the sordid story.

He didn’t leave. He talked with me. Told me he doesn’t love me less because of that. He took me for therapy. Then i started coming out of my shell, going one step at a time, giving an inch of me, one time, at a time but it was a hard journey. He stood by me. It was the 5th year of being together, i finally let him go all the way. A year later, we got married. I am still not the carefree child i was then but i am in a better place now.

THE EFFECTS OF CHILD MOLESTATION

Child sexual abuse or child molestation is a form of child abuse in which an adult or older adolescent uses a child for sexual stimulation and the effects of sexual molestation has far reaching consequences for the victim. Effects are usually more of psychological and behavioral and includes:

The stories of Deborah and Amina echoes those of millions of sexual molestation by family members, close friends and trusted associates all around the world. Stories of child abuse, degradation all trailed by psychological issues related to sexual abuse.

THE SOLUTION TO CHILD MOLESTATION

Child abuse is becoming more prevalent in our society and it is a problem we all should be wary of. Report cases. Talk to friends and families. Educate people. We need to fight this.